Rummaging through an old box of family photos, I found this poem, “The Valley Wind,” which had been typed on a slip of paper.  First, I thought this beautiful poem had been written by my grandfather, a poet and activist, because many of his writings had been composed on a typewriter. Whether or not he was the author, I realized that someone in my family had been sufficiently touched by these words to take the time to type them out and keep them among their precious mementos.

Noticing that the poem had an ancient Eastern sentiment, I investigated further and found the author to be Lu Yün of the 4th century C.E. The poem first appeared in English in 1918 with the title One Hundred and Seventy Chinese Poems, translated by Arthur Waley.

Living in retirement, beyond the world,
Silently enjoying isolation,
I pull the rope of my door tighter
And stuff my window with roots and ferns.
My spirit is tuned to the spring season,
At the fall of the year, there is autumn in my heart.
Thus, imitating cosmic changes,
My cottage becomes a universe. 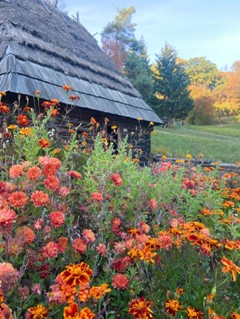 I like that “The Valley Wind” gives a positive perspective on retirement. In speaking of elderhood, the author does not convey the often-mentioned pain, tiredness, forgetfulness, or deteriorating bodies. Rather he speaks of the pleasures of slowing down, living a simple life and practicing mindfulness illustrated by his taking care of roots and ferns. His ego has taken a back seat in accepting what is. As a result, he experiences something beyond his personality. He senses the rhythms of nature—the cosmic cycles, autumn and spring—dwelling within him. This makes sense because deeper awareness most often happens when the mind is quiet, when everyday worries are set aside. His words beautifully reflect the commentary on the Ninth Zen Oxherding Picture, which dates back to the 12th century. “He observes the waxing and waning of life in the world while abiding unassertively in a state of unshakable serenity.”

In retirement and solitude, Lu Yün starts to merge with the greater cosmos. He feels spring and autumn within his own being and speaks of his cottage becoming a universe. In mystical terms, he’s approaching unitary consciousness—the final stage of the spiritual journey during which seekers no longer think, speak and act from their own consciousness but from a wider, all-encompassing one. Today’s images obtained from the James Webb telescope illuminate even more cogently the vastness of this consciousness.

Reflecting on my own life as an elder, I find this poem touches a deep place within me. It soothes and inspires me, even though I could never live alone in simplicity like Lu Yün. I like working deeply with people, walks with my husband and Zumba classes too much to go live in a modest cottage by myself. Yes, my outer life is delightfully engaged but my inner life is approaching the ideal of simplicity and connection with something greater that’s expressed in this poem.

After my father died when I was eleven years old, my grandparents came to live with us. I could sense their deep spirituality as I observed them say the rosary, read the Divine Office, watch Bishop Fulton J. Sheen on TV and happily embrace life. Yet, how a poem by a 4th century Chinese (most-likely) Buddhist ended up in a box of photos of my very Catholic English/Irish grandparents remains a delightful and inspiring mystery.