Many Moments to Remember

A Celebration of Light on the Hill 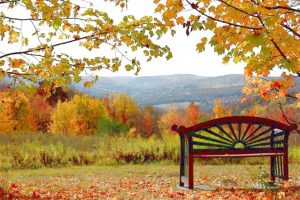 The following chronology in words and pictures can only recall a few significant moments of an ongoing journey that includes many, many people (and countless other beings).  May this collection of images and reflections touch your own memories of Light on the Hill with love and joy; may your enlightened heart shine forth to help all of us find the way forward.  — Peter Fortunato, founding Board member 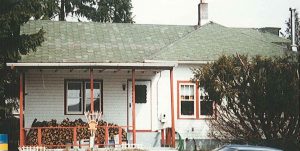 In July 1985, Larry buys the first 70 acres of property with the main house.

In August 1985, Alice visited the land for the first time and felt strongly connected to it. She wondered what this meant for her then-casual friendship with Larry. She said to him: “You are living my dream to be in the country, to grow spiritually, and to have a place for others to come on retreat.” He responded: “I know I am to be a caretaker for something but don’t know what that will be.” From the very beginning, a shared vision for LOH has been interwoven with the fabric of their relationship. 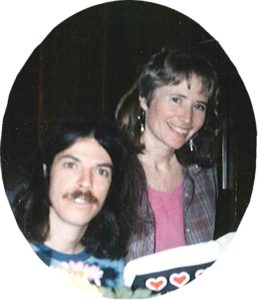 Over the next few months their relationship deepened, culminating in a “mystical marriage” in late December, 1985.  On a whim, they stopped into a beautifully decorated church to pray. In a seemingly magical moment, both experienced an intertwining of the different levels of their beings. It took 3 1/2 years and many challenges before the actual marriage took place! 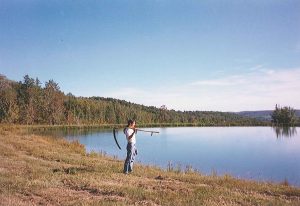 The Chinese Book of Changes counsels that Time is the means of Heaven here on Earth.  The daily effort to tend the land has often been in Larry’s hands. 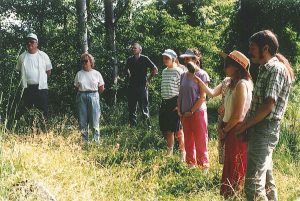 On June 28, 1988, at an auction Larry acquired the 125 acres where the Meadow and Woods Cottages and the Pond Retreat Hut are now located.  Alice had had a vision that this land would be essential to the future of the project they were undertaking – a project, as it turned out, that was much larger than what they had at first imagined.  During the surprisingly heated auction, the bidding for the land soared and Larry paid much more than what he had anticipated. Alice remembers that it was as if a “sacrifice” had been required. When a trailer was put up for bid and Larry sought to explain that it was actually located on property he already owned, he was called a squatter! 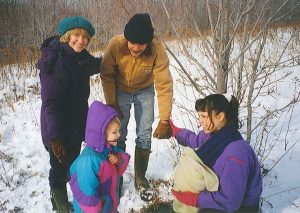 Many kinds of personal ceremonies have taken place on the land. 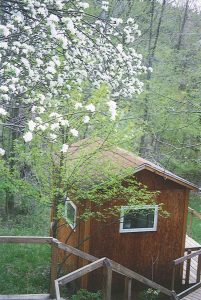 Springtime at the Healing Retreat Hut, the first retreat structure, 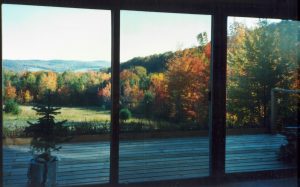 The Meadow Cottage was built in 1989, and while it exhausted all the funds then available, the vision of what LOH could become remained strong.

View from the Meadow Cottage

Alice and Larry were married August 12, 1989 just below the spot that became the site of Inner Light Lodge. 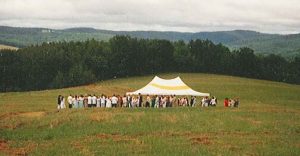 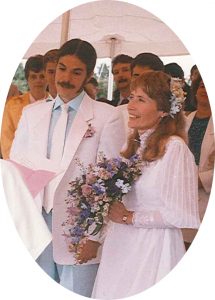 For Alice, “The story of Light on the Hill is a love story.”

Larry adds,  “Let the love spread to all.” 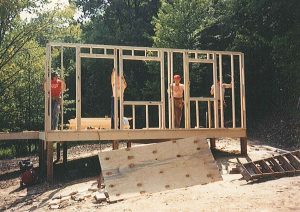 On May 21, 1991 Light on the Hill was officially incorporated.  The first Board of Directors was comprised of diverse individuals who shared a deep commitment to spirituality and especially to the inner quest.  LOH has always been ecumenical in terms of the wisdom traditions and practices it supports, and it has never relied on financial support from any supra-organization.  Over the years, benefactors have come forward from many different backgrounds to sustain the vision and its manifestations.

The Woods Cottage under construction, July 1992. 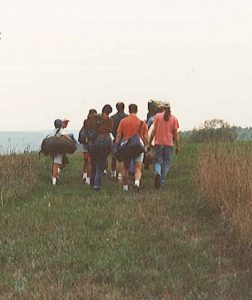 By the summer of 1992, solo retreatants and various groups were using the facilities year round.  This photo is of a group of men and boys headed into the woods for the first Earth-keeping Camp, which included a sweat lodge, firelight story telling, instruction in earth-keeping, and an initiation into wilderness wisdom.  The land itself has always been honored as a teacher at LOH. 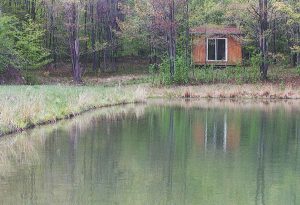 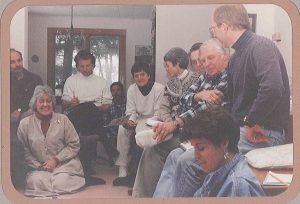 On February 10, 1996, the LOH Board and friends gathered with architect Mark Connors (center left in white shirt) to envision a larger facility that could accommodate more sizeable groups. After a visualization process, the participants were amazed at how similar the elements of their visions were—a heart and wings, tipi and longhouse, flying eagle, and center space with wings.

A visioning process begins for what will eventually become Inner Light Lodge.

“Blessed are the innocent who believe and trust.”—HIK 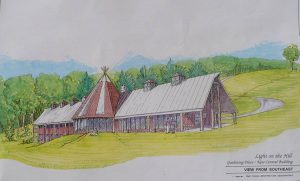 lities describing the building were also very similar—light, natural wood, beauty, single rooms for deep reflection. In a second meeting, the envisioners laid their hands on Mark, to give him inspiration and open-hearted energy. Even years later, he claimed that it was the best architectural experience of his career. The question in everyone’s mind was how would the money be raised. Larry replied: It will come from wherever it is now! And so it was—but only after many challenges and years of alternating between fundraising and building. The whole building process required much faith, patience, and resourcefulness, especially for Larry and Alice. 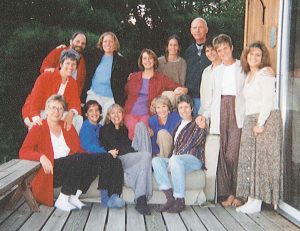 In the late 1990s another significant development at LOH was the beginning of the Hidden Treasure program, “a three-year course in personal healing and growth,” instituted by Alice and Barbara, “Babs,” Prud’homme.  Babs passed away before the inaugural class graduated, but she inspired the first major donor to fund the construction of Inner Light Lodge.

The first Hidden Treasure graduates, May 2000.

One’s true being is hidden behind many veils…. The deeper features are distorted by the games of the ego…. But the core is immaculate—the hidden treasure. The only way to see into the depths is to reverse the distortions—purify oneself by the power of authenticity.”—Sufi Master Hazrat Inayat Khan 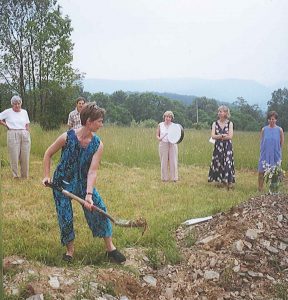 Construction, headed by Bruce Tubbs, began on July 20, 2000.  The entire process from vision to functional facility would require almost a decade! 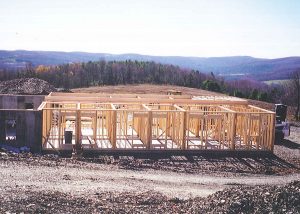 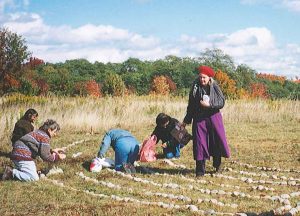 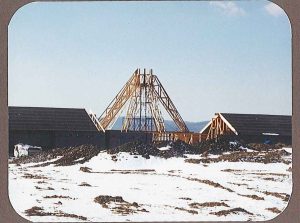 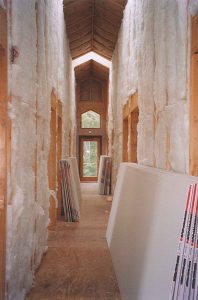 How much of what is truly important to our lives is unseen? 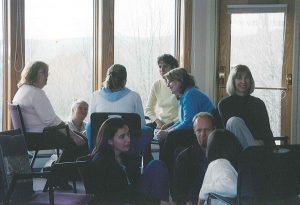 Inner Light Lodge was completed in April 2005, and people made use of it immediately.  Before long, reservations were required well in advance for groups using the space for retreats and teachings sometimes lasting up to two weeks.  People have come from such countries as Australia, Afghanistan, Canada, Ireland, England, New Zealand, and Scotland, and from at least 20 of the US states.

A group meets in Fall 2005, soon after the Lodge opens.

The Vision Continues to Flow… 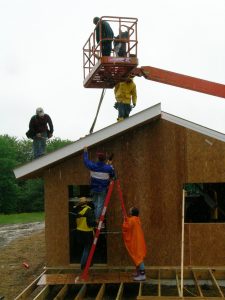 The nearby Pathlight Cottage, built especially for workshop leaders using the Lodge, was baptized at a rainy “community build” consisting of volunteers, headed by Mike Ward. It was completed and in use by October 2009. 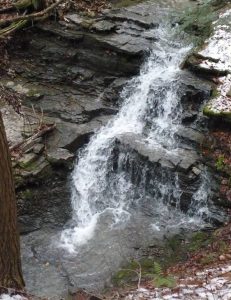 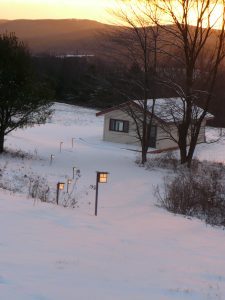 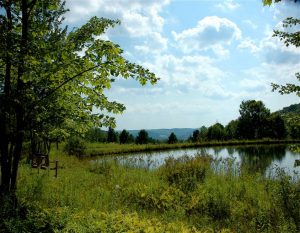 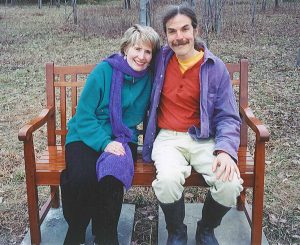 Alice and Larry remain the Co-Directors of Light on the Hill.  Their commitment to the spiritual life, and their tireless generosity on behalf of the vision are  inspirations to all. 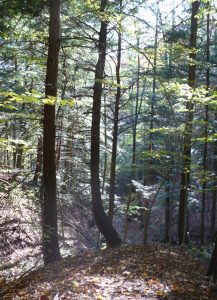 And For All  of You

Light on the Hill

And Held its Vision

All Along the Way 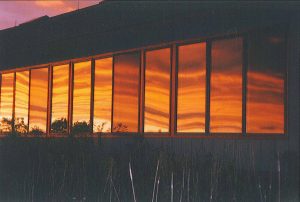 A sunset reflected in the windows of the Lodge suggests the prism of beautiful experiences our own spiritual light is capable of producing.   How will the founding vision and these first 20 years of manifestation develop further?  Who will help?